SONG FACTS:
Singer and rhythm guitarist "James Hetfield" wrote this song while he was on the phone with his girlfriend at this time. Since he held the phone with one hand, he plucked the four open strings of a standard E-minor chord with the other, which eventually made up the first two bars of the song. The lyrics were also dedicated to his girlfriend, which talk about being "so close, no matter how far", indicating the bond they shared even when Hetfield was on tour. Initially, the song was not meant to go on the album, and Hetfield had written it for himself, but only after drummer Lars Ulrich heard it was it considered for the record.

This is one of the few Metallica songs where James Hetfield played the guitar solo rather than Kirk Hammett.

Hetfield explained this song to Mojo magazine December 2008. Said the Metcallica singer: "It's about being on the road, missing someone at home, but it was written in such a way, it connected with so many people, that it wasn't just about two people, it was about a connection with your higher power, lots of different things."
Hetfield added: "I remember going to the Hell's Angels Clubhouse in New York, and they showed me a film that they'd put together of one of the fallen brothers, and they were playing Nothing Else Matters. Wow. This means a lot more than me missing my chick, right? This is brotherhood. The army could use this song. It's pretty powerful."

Hetfield told Mojo that after penning this love ballad, he was initially concerned about playing it to the rest of the band. He explained: "At first I didn't even want to play it for the guys. I thought that Metallica could only be the four of us. These are songs about destroying things, head banging, bleeding for the crowd, whatever it is, as long as it wasn't about chicks and fast cars, even though that's what we liked. The song was about a girlfriend at the time. It turned out to be a pretty big song." 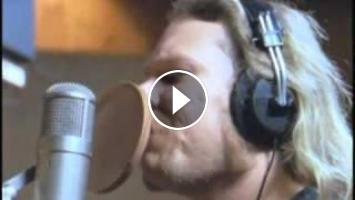 Official Music Video for Metallica's "Nothing Else Matters" SONG FACTS: Singer and rhythm guitarist "James Hetfield" wrote this so...