While this is only a partial recording of the show, two of the three songs are probably the ones you would skip to anyway: "Sweet Home Alabama" and the legendary closing track that has inspired legions of concert-going yokels to make millions of ironic requests over the years, "Free Bird." The first track is an excerpt of a standard Skynyrd live show cover, Jimmie Rodgers' "T for Texas" The guys take six minutes to stretch their legs on this version of "Sweet Home Alabama." The song had been released three years prior as a response song to the Neil Young numbers "Southern Man" and "Alabama," which were both critical of southern politics. Ironically, by some reports, Van Zant was wearing a Neil Young t-shirt at the time of this performance.

The show is closed with "Free Bird," which by many fans' estimations is only rivaled by Led Zeppelin's "Stairway to Heaven" as the most epic closing song in rock history. Allen Collins handles most of the five-minute solo, while Gary Rossington plays the "bird-chirp" guitar parts, which are not on the original recording, as well as the slide work on the opening riffs. Billy Powell also plays a masterful piano solo that is unique to the live show.

While Lynyrd Skynyrd would release the multi-platinum Street Survivors in October of 1977, the band's structure would be fundamentally devastated by the crash of their private Convair 240 that took the lives of three members, as well as the pilots and assistant road manager Dean Kilpatrick, and terribly injured every other member, except for Honkette, JoJo Billingsley, who was at home with her children and had reportedly begged the band to quit using the plane after dreaming of such a crash.

From the ashes of this Skynyrd incarnation, Van Zant's younger brother, Johnny, stepped in and made Lynyrd Skynyrd a popular band once more when they reformed in 1987. Lynyrd Skynyrd is planning to release an unearthed recording of pre-plane crash Skynyrd in 2009. 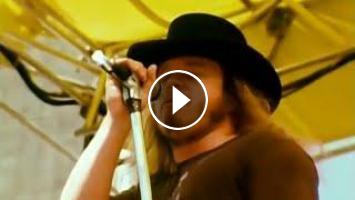