Night of the Jackyl

Night of the Jackyl

Jackyl played the Bricktown Brewery Parking lot in the Summer of 2004…you were probably there. It was a warm, beautiful Oklahoma Summer night. I’d guestimate that there were close to four thousand people hanging out for this show. I vaguely remember getting onstage to do the stage announcements, I think I sang a brief piece of my now familiar version of WAR PIG-LATIN. I also used the opportunity to drop the M-F bomb a few times! The guy I was working for at the time told me that he and the owner of the Bricktown Brewery were upstairs counting receipts and money, all of sudden they hear this booming voice over the PA going “”How you crazy Mother F-ers doing”. The owner of the Brewery goes, “who’s that?” My General Manager goes…”It’s just Bladerunner”, he replies with “oh, okay”. Glad they expected things like that from me, it always made me happy not to let the corporate suits down. Later, Jesse, the singer from Jackyl (duh!) calls me up on stage and gives me a chainsaw. Then he grabs a barstool and a can of gasoline, as if the fact that I had a chainsaw in a crowd of four thousand people wasn’t already violation enough of any insurance policy that anyone could have ever thought of applying for. He lights the barstool on fire, and I’m all about the chainsaw, so I start cutting the sh%t out of it, debris and flames shooting into the first 5 rows of the crowd. After that, as if that weren’t enough, Jesse yells at a roadie to give me a guitar. I strap that bitch on like I owned it. No one over hears Jesse telling the roadie “don’t turn that thing up”. I’m flying around onstage as if I were the real reason four thousand people paid to get into that place, but you know…when someone invites you on their stage and gives you a guitar…you should think like that. maybe that’s why you get called up there in the first place!

Between Jimmy and Chris, and maybe even Jesse on guitar, there was no way of anyone at the Bricktown Brewery knowing I wasn’t playing anything that was coming through those stacks towering behind me. It looked like I was though! In reality, I can barely squeak out the three chords needed to master Smoke On The Water.

Like any true rock star (wannabe) I wasn’t about to let the night end there. There was an after party at The Samurai Saki House. SAMURAI SAMURAI SAMURAI! (were you saying that out loud?) So I headed out with my crowd.

I cannot remember, or maybe just don’t want to mention the name of the band, cuz it might be yours, that was playing The Samurai that night. Apparently the guitar player for this band was at the Jackyl show, and was also somehow aware of the fact that I play guitar like old people drive… really damn crappy. I’m guessing he was not as entertained as the rest of the crowd with my rock star abilities, and decided to call me out in front of the Samurai crowd.

The final set of the night after the band got back from their break, the singer of the band is up with the “Hey ya’ll…Bladerunner from (Local Rock Station) is here tonight.” I think everyone already knew that anyway. I was working the crowd pretty heavily on my own. “How many of you saw him kick ass on guitar at the Jackyl Show?” everyone’s cheering. I’m kind of smiling like, ‘okay…where’s this going?’ Then the guitar player grabs the mic…”How many of you want to see him play that solo here tonight?” The crowd of far less than four thousand erupts again. I was like “oh…sh%t… now I see where this is going.” I tried playing it off like I was tired and couldn’t muster up any more energy…and the guitar player starts the chant…”Bladerunner…Bladerunner…Bladerunner” all the while smiling on the inside, like the dick he was. We had already had a brief run in a few times over stupid local band politics, he was still pissed about something I had said 5 years earlier about a band that he thought was far more deserving of their pop success than I did.

So the chant gets louder and the drunk high fives begin…and at this point (stupid peer pressure) I was really starting to get that “caught shoplifting” feeling, where your body gets really warm, and the room starts to not make sense because everything slows down and your mind starts to numb up a bit and you’re trying to figure out a way out of a situation that there is absolutely no way out of.

I thought…’ok…I’ll go up…play a few chords…act like I’m tired and finish up” so as I’m walking up there the guitar player hands me his wannabe rock star knock off guitar, and laughs when he tells me “This one’s actually plugged in…so let me know when you’re done with your solo…ROCKSTAR” then laughed and walked into the crowd.

I slung the guitar around my shoulder, set it in place…tweaked one of the knobs…I have no idea which one now, and didn’t know then…it just seemed like anytime a guitar player slung a guitar over his shoulder and set it in, the first thing he did was tweak a knob. I grabbed a pick off the mic stand, muted the frets and chopped the pick up and down a few times like I was testing levels. The crowd let out a group scream like I was a roadie running across the stage to straighten a mic chord right before the curtain dropped for an Aerosmith concert.

I started to smile a bit when it hit me that I had just figured out exactly how this was going to end…one of those things that just hits you when you think you have absolutely no way out of a situation, but if you look hard enough…maybe you do.

So I did the rock star stance, and started into Muddy Waters “Mannish Boy”, those very same chords that make up 75% off all blues records ever recorded. I’d actually practiced that song quite a bit just because at one time I thought it was one of the coolest guitar riffs ever written. And writing this…I still have to agree with that.

So I am cranking Mannish Boy, it actually started to sound pretty damn good…The drummer picks up the beat, and the bass player joins in. I was looking for the singer, and he was on the side of the stage looking at me with the same undertone the guitar player had bringing me up there…I knew he wasn’t much of a Bladerunner fan either.

I look out in the crowd and the guitar player, who apparently forgot I was holding HIS guitar, makes that familiar up and down hand gesture like he didn’t have a girlfriend to do that for him, and rolls his eyes. So we got the rhythm going, it sounds fairly decent, everyone was pretty lit anyway…so this little game plan started to backfire on those two numb nuts that called me up there…and I stepped up to the mic…

We are jamming the crap out of this freakin’ song!!! I screwed the lyrics up and repeated the same verse or chorus like three times, but no one knew, no one cared. 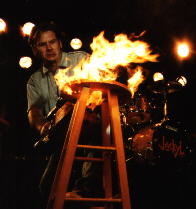 Here’s the part that hit me right before I started into Mannish Body…the grand finally…I had to show the guitar player my appreciation for ‘calling me out’…I kicked the mic stand over…stepped back…took the guitar off my shoulder…grabbed it by the neck…swung it over my head…and smashed the living sh%t out of it onto the Samurai stage! Over and over and over….Feedback ringing through the monitors, the drummer starts beating the drums in time with my frenzy revengie, strings..cheap wood…knobs that I had no idea what they did…it was all there flying through the air, like a chain sawed barstool on fire! The crowd was going F-ing crazy…high fives…screaming…I grabbed the bass players mic, cuz he was gone, and looked for the guitar player…his eyes was like a pizza pies! I said to him most specifically but addressed the crowd and said…”I call that solo ‘ROCK STAR’… then I said…hey____I’m done.”

I think the only reason the guitar player didn’t kick the living sh%t out of me that night, was because he knew the crowd wouldn’t let him get out of there alive. And then he’d have to hear me rant about it on the air for the next two months. He seriously had to just stand there and take it.

It made me laugh when one of the drunk dudes in the crowd came up with a Sharpie and a piece of the guitar and handed it to me…I looked down to sign it, and he had actually gotten the guitar player to sign his own piece of destroyed guitar. Right above the guitar players name I signed my name “Bladerunner Loves…” and drew a heart around our names.

I know that the Hard Rock would have no reason to ever consider that piece of local rock/radio history anything valuable enough to even put in their storage room, but I would LOVE to have that piece of guitar back to hang in The Bladerunner Radio Studio.

Every now and then I still get an email, or have someone talk about that night.

I still can’t play guitar for sh%t, but you know, don’t let that stop you from calling me out in front of a crowd.