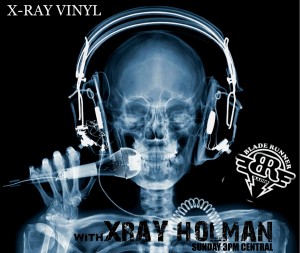 Bladerunner Radio was heartbroken to learn that our very good friend The X-Man, X-Ray Holman had passed away on December 31st, 2016. Ray’s heart related illness has finally left him in peace.

“Ray and I started our friendship off on cars and radio…and we maintained that for over 25 years, Spending hours together at swap meets, car shows, clubs, concerts…and one of our final get together, Ray driving our Cadillac Escalade with me in the backseat interviewing Michael Sweet of Stryper heading back to The Diamond Ballroom” Bladerunner

Ray LOVED doing his radio show and was very attentive to instruction and detail, constantly trying to find new ways to present old music, and to make his next show better than the show before.

Ray recorded over 30 X-RAY VINYL shows for Bladerunner Radio, and with the blessing off his wife Brenda and Ray’s family, we are continuing to play X-Ray’s shows for you each Sunday at 3pm CST with a repeat performance every Wednesday night at Midnight CST. We have edited and remixed several of Ray’s show’s to make each show a bit different from the show before, just like Ray would have done it.

X-RAY VINYL is a radio show based on Ray’s personal vinyl collection, as well as The Legend of “XRAY VINYL”. The Soviet Union’s banning of much of the Western and European music from the 1950s and 1960s for fear of negatively influencing the youth of The U.S.S.R. . As this took place, soldiers began smuggling banned music from other countries into Russia, etched into old medical x-rays. Sometimes called “Bone Music” or “Rib Music”. They were crudely recorded, sometimes sounding quite bad, but when this was the only thing available, it was still pretty good. Cigarettes were used to burn holes into the center of the x-ray and the edges trimmed into a circle to fit and play on a turntable.

X-RAY VINYL is a bit of a spin off with a lot of the music coming from the 60’s, and Ray’s personal record collection covering the 70’s.

X-RAY VINYL can be heard each Sunday Afternoon on Bladerunner Radio at 3pm CST and again on Wednesday Night at Midnight.

Ray truly loved doing this show, and loved even more hearing from his listeners. Please…call us at 623-ALL-ROCK and, in memory of a greatly missed friend, make a request.

Here’s Ray’s original Bio that he had penned:

I was born and raised in Oklahoma City and still live there. In ’74 I was asked to leave high school and ended up joining the Navy and enjoyed it thoroughly. When it came time to re-up I was unable to stay in the Seabees due to the fact that my job was full and wasn’t taking anymore people. As I left my recruiters office I noticed the Air Force was just across the hall and signed up. I am a Vietnam Era Veteran even though I never spent any time in country. Two Honorable discharges later I decided it was time to come home. I found my way into truck driving and knew I was where I needed to stay. I loved the travel and seeing the US. After 2.5 million miles I had pretty much burned out on that and sold my truck.

I met Bladerunner after seeing a picture of him with his yellow 2nd generation Camaro at the same time I was restoring a ’69. We became friends and he was interested in my photography hobby. I did some video and still photography during his interviews of Bands and musicians. It was a good time meeting people that I felt like were untouchable but he had the key to the door and I went along for the ride.

As far as air staff goes I have a very limited background but I do love classic rock and am ecstatic at the thought of being given the opportunity to have a show.

X-Ray Vinyl goes back to when Russia had banned most western music and it was smuggled in on X-Ray film to satisfy Russian young peoples hunger for Rock and Roll. My show will have some mainstream classic music mixed with a lot of cuts that weren’t played on a daily basis. My goal is to bring you back to an early time in your lives and memories of a more laid back era.

You will be able to interact with me on my Facebook page during the show. I will try to get your requests on unless I am overwhelmed. My FB is William Ray (X-Man) and you can pick it out of the many search results by the X-Ray Vinyl logo for my profile picture. Thanks for reading and I hope you enjoy the show.