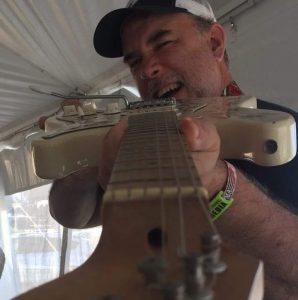 ON (& OFF) Air Personality of Bladerunner Radio’s … wait for it… Capt Whoremoan Show live every Friday night! And repeated Monday night ‘cause it is just that damn good.I have been accused of single handedly causing a weekly depletion of Aqua Net due to the rebirth of HAIR METAL on my show.  Ok, maybe a slight exaggeration, but spandex sales are up 8%. Seriously, I grew up on a WIDE variety of music but 80s/early 90s is my “go-to”. You’ll hear some April Wine, Skid Row, Van Halen, G ‘n’ R, Rush, & Tesla, but also Ramones, Black Crowes, Molly Hatchet, & SRV, to Buddy Guy & even Robben Ford. And always promoting local & unsigned bands (ie: Mad Margritt, Cosmic Gypsies, Susan Angeletti & Lefty Williams). I got my start in radio here in Atlanta at WKLS. Bladerunner & I struck an immediate friendship his first night on the air (I was his first caller!). We had 2 great years together (on & off the air) doing a show called Renegade Radio. OK, fast forward .. ohhhh.. 23 years… I get the call from Bladerunner, he informs of this insane (so it seemed at the time) plan to revive radio from the dead. Let’s face it, FM has gone so far downhill, it you listen really close, you can almost hear it SUCK. I got my first taste of Rocklahoma in 2014, and have been attending it ever year I can ever since. I enjoy catching up with my old friends from Ratchet Dolls, Chaotic Resemblance, Station, The Chimpz, Ragdoll, and so many others I met and have been playing on my show ever since. Check out my Facebook page for many pics from 2018 Rocklahoma! “ROCK that doesn’t SUCK” is not only my catch phrase, but it is everything I believe in. It is why I love what I do here at Bladerunner Radio, and I do it with all I have. With your help, we ARE bringing the fun back to Rock Radio. Tune in and you will see it for yourself. Facebook ~ Captain Whoremoan Show on Bladerunner Radio Twitter ~ @CaptWhoremoan Email ~ captainwhoremoanshow@gmail.com Phone ~ 1.623.ALL ROCK